Back in September, I wrote about the Aftermath Dislocation Principle, a dystopian model village designed and curated by James Cauty, depicting a post-apocalyptic Bedford at the heart of Banksy’s Dismaland. Shortly after writing the blogpost, I noticed that the site was getting a fair amount of traffic from Cauty’s website. It turned out that the bizarre tale of the Panacea Society, and the unexpected apocalyptic significance they gave Bedford, gave James the idea to continue the story. Setting themselves up in a disused railway arch on America Street in London (near Borough tube station), Cauty, his team, and the post-apocalyptic police set to work building a New Bedford (“sponsored by Greggs and the Panacea Society”) in Little England’s looted and desolate land. Yesterday, I finally got down to London to see how “New Bedford’s Police” were getting on.

The mysterious devastated landscape of post-apocalyptic Bedford – devoid of people and teeming only with police officers – now has a body of water annexed to it, with a bridge being lowered in place leading to a fortified ziggurat. As the photo above illustrates, around the New Bedford tower is a camp populated by those shut out of the city (resonant especially of “the Jungle” – the migrant camp at Calais).

There is much to unpack in Cauty’s new addition to the installation. “New Bedford” conflates the biblical ideas of the “New Jerusalem” and the Tower of Babel. Echoes of the former include the squalid and torched camp outside of the city’s walls and the body of water separating the island from the rest of the model’s disasterscape. Parallels with Revelation 21:8, where the apparently always-open utopian city is set against the unrighteous who suffer in “the lake that burns with fire” sprang to mind immediately. Always an uncomfortable facet of the text; the Church of England’s recommended readings for funeral services understandably stops short of reading verse 8 when it recommends Revelation 21.

Nonetheless, it is Babel’s imagery and iconography which looms largest in Cauty’s new development. The story of the Tower of Babel is a brief vignette in the early Genesis narrative (Genesis 11:1-9). It narrates how, as primordial humanity ventures further east, the assembled people decide to “build ourselves a city, and a tower with its top in the heavens… otherwise we will be scattered abroad upon the face of the whole earth” (11:4). God thwarts their plan by “confusing their language” (11:7) and, as a result of the ensuing confusion, scattering them over the earth anyway. The narrative forms part of a series of stories in Genesis 1-11, where early humankind tests their boundaries of their relationship to God, to disasterous results. In this narrative, the divine court appears to be threatened by the potential for humankind to act collectively: “this is only the beginning of what they may do” (11:6). The narrative is often remembered as a warning against humanity’s hubris; all grand plans that threaten God’s supremacy will be thwarted.

Cauty directly alludes to the Babel narrative in the exhibition’s publicity material: citing Genesis 11:4 on flyers and on a large collage banner that overlooks the installation. 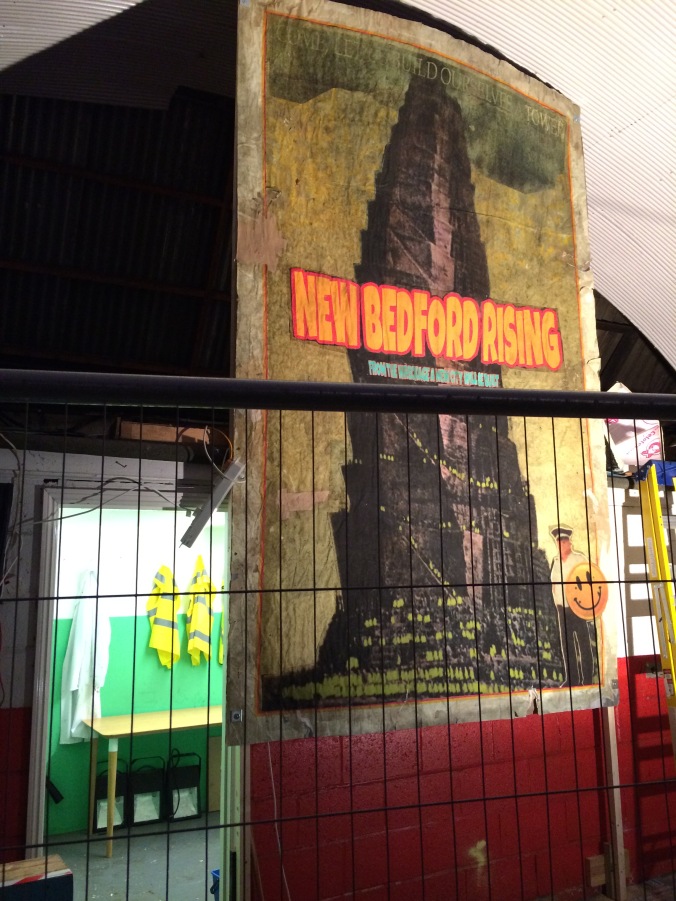 The other main change in the installation is the way the model can be viewed. My colleague Mette Bundvad from the University of Copenhagen is planning to write about the installation’s representation and use of space. I will therefore simply note that it is only the “New Bedford” section that visitors can see unmediated. The rest of the exhibit is screened off, and can only be viewed through a series of peepholes. The effect is powerful: New Bedford – and its promise of police-patrolled order becomes a focal point; the chaos of post-apocalyptic Bedford can be viewed in vignettes, a totalising vision of the ruined landscape rendered impossible.

A view of post-apocalyptic Bedford through a pinhole, with New Bedford rising in the background

Again, echoes of the perspective offered to biblical prophetic visionaries are discernible here. When Ezekiel (Ezekiel 40-48) and John (Revelation 21-2) are shown the utopian Jerusalem, their accounts describe the visionary cities in rich detail, with the prophets seeing the city first from a “high mountain” (Ezek 40:2; Rev 21:10) and then being transported around the city with an angelic guide. The lands outside of the city are given cursory, and confused mention. The omniscient perspective of God is highlighted in Revelation’s account, as his throne lies at the cente of the city, and his radiance is such that it provides the city’s only (penetrating?) light source (22:5). The builder-police of Cauty’s new Bedford, it appears, attempt to give their utopian construction the same prominence, playing God with the viewers’ perspective as they do so.

The Police of ruined Bedford letting off steam in an impromptu fairground in the car park of Burger King (not pictured: the burnt-out and looted McDonald’s next door)

Cauty’s piece is an imaginative meditation on the meaning of “apocalyptic” in the era of globalization, capitalism and surveillance. The model is crafted in excruciating detail. I spoke to one of the team and bought a “headless” figure. The team have to construct each figure from scratch, since the “police” models they import don’t have the required variety of stances (and are wearing a US uniform). Thus heads need to be grafted onto other models, and uniforms painted on to these tiny figures. Below you can see how detailed the work on each individual figure is, with my fingernail as a comparison!

One of the “headless”

Luckily for me, Jimmy was at the installation and I got the chance to chat to him about the new development. He confirmed that he had originally chosen Bedford as the ADP’s setting with no idea of the strange history of the Panaceans that lay within it, and that the story of the community had inspired him to explore the idea of a “New Bedford” rising from the ashes. It became clear to me that for Jimmy this installation is an ongoing story with deliberate indeterminacies built-in. Elsewhere Jimmy has stated “we’re not really sure what it’s about” or what the apocalyptic event was that caused Bedford’s desolation. This open-endedness thus gives him an artistic space to explore what happens in the apocalypse’s aftermath. We talked about what may be in the New Bedford/Babel ziggurat: he suggested a McDonald’s or a rainbow uniform statue. I like to think that the New Bedford Police would be keen to extract Joanna Southcott’s Box of Prophecies from the ruined terraced street the Panaceans called home. Or perhaps it’s still out there at large, in the ruined Church in New Bedford’s shadow? In any event, it may well be that the Aftermath Dislocation Principle has life in it yet. Rumours abound of a tour… Bedford would certainly appear to be a natural stop if so…

It was fantastic to meet Jimmy and to see the installation. I’d urge anyone to go and see it. The attention to detail is fantastic, and it’s underpinned by an anarchic sense of humour. Before I left Jimmy kindly signed a card for me, pinning the blame for New Bedford (and the excruciatingly detailed work it entailed for him and his team!) on me and the blog. 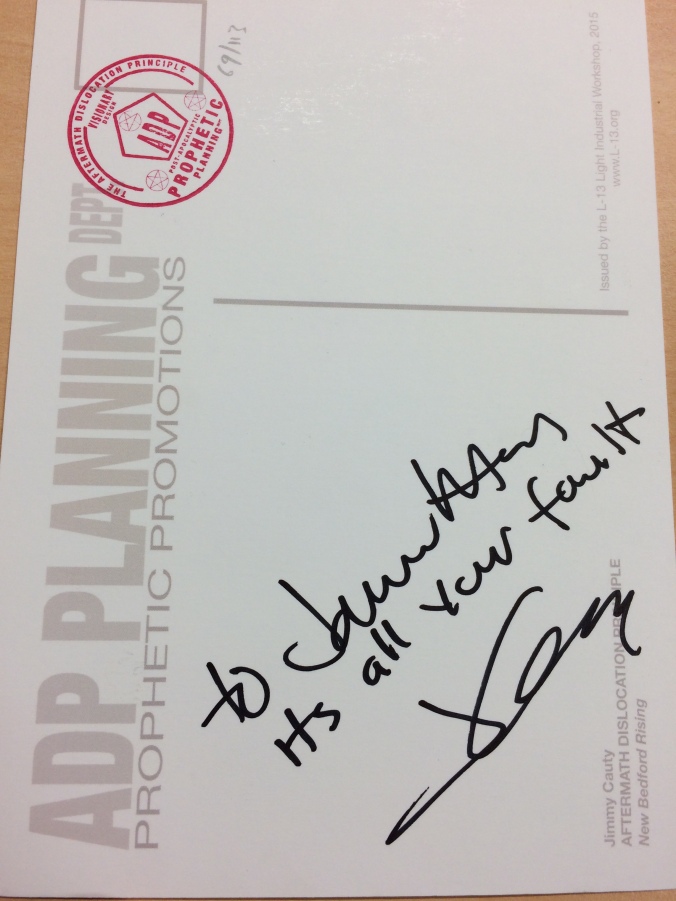 “It’s all your fault”

Personally, I think the blame lies squarely with Octavia and the Panacea Society, whose belief that end of the world would begin in Bedford, still captures the imagination…